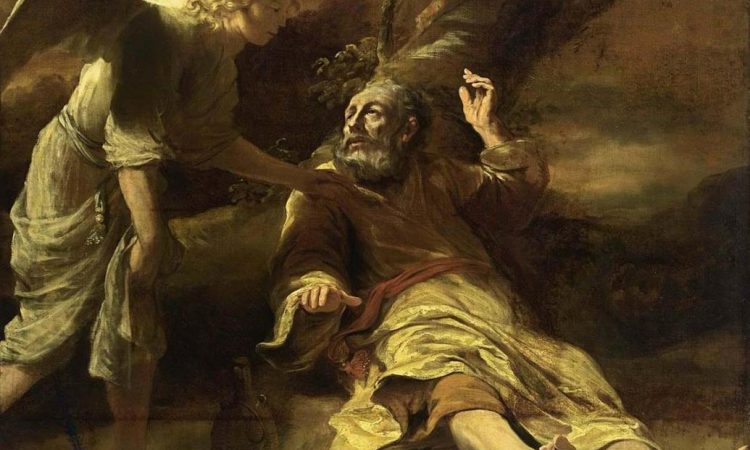 Today we start a new sermon series – 8 weeks looking at the Old Testament prophet Elijah.  8 weeks you might be saying – how on earth can we talk about one prophet for 8 weeks?  I hope you’ll find there’s plenty to say in this story of miracles and prayer, good and evil, and above all of God working in and through one faithful man. My job this morning is to set the scene, without spoiling the plot for the people who will be speaking in the weeks to come.  So, I plan to answer those questions beginning with W – when, where, who and why as a foundation for the next  7 weeks.

To begin – When did the story of Elijah happen?  The short answer is in the 9th century BC, but we need a bit more context.  We need to go back to the time of the kings of Israel after the days of a united kingdom under Saul, David and Solomon.  The kingdom then split into the southern kingdom of Judah and the northern kingdom of Israel.  Israel went through a succession of kings until we come to Omri round about 876 B.C.

Omri reigned for 12 years, of which about four were with his son Ahab as co-regent.  Omri established a new capital city at Samaria but died before it was finished and it was left to Ahab to complete it.  Samaria was further west than the old capital, so nearer to Phoenicia, and it was advantageous for Ahab to marry Jezebel, the infamous daughter of the king of Sidon in Phoenicia.  Jezebel, however, was not only a Phoenician princess, she was a zealous evangelist for the cult of Baal, and she wasted no time in getting Ahab to follow this cult too. Ahab is described as “the king who did more to provoke the anger of the Lord, the God of Israel, then had all the Kings of Israel who were before him” – and that’s saying something!

During his reign Ahab faced threats from the powerful neighbouring nations of Aram and Assyria, but his most prominent opponent wasn’t either of these, but one man, Elijah.  And can we give any dates to Elijah? Quite simply the answer is no.  I’m sorry to disappoint those of you who like a good family tree complete with dates of birth and death, names of mum and dad, or siblings..

We don’t do much better when we come to the question Where? as far as Elijah is concerned.  He is simply described when he appears on the scene as Elijah the Tishbite.  Now Tishbe is not an auspicious place for a great man of God to begin his life.  Tishbe was so obscure that archaeologists can’t even tell us its location today.  We know it’s in the region of Gilead, which is probably on the eastern side of the river Jordan, in the present day country of Jordan – but this is just one possibility.

Does this matter?  Probably not, what’s important is that he did appear on the scene at that moment.  While we’re thinking about Where, we might ask if he got about much, and this we can answer with a very definite yes.  He went north into Phoenicia, then back down to Carmel in Israel, before having to flee into Judah.  He went all the way to the Sinai peninsula in Egypt before returning to Jericho and the familiar territory of the Jordan.

While we’re thinking about where, it might be helpful to remind you where to find Elijah’s story in the Bible, and that’s 1 Kings, chapters 17-19 and 21, and 2 Kings chapters 1 and 2.  It would be really good if you could find time to read these chapters in preparation for the next 7 weeks, and see how all the Elijah events fit together.

So who was Elijah?  His name means something like “My God is Yahweh” so he proclaimed his allegiance to God in his name. The verses in the letter from James sum him up as a human being like us, and one who prayed fervently.  We’ll see, Elijah’s  times of weakness, times when he became so stressed that he wanted to die, despite knowing that he’d been called by God.  And just like us in our times of weakness, stress and anxiety, God didn’t reject Elijah, didn’t write him off and find someone else, instead he gently recharged and recommissioned him, returning him to his calling, blessed for service once more.

In 2 Kings 1:8 we actually have a description of Elijah when some messengers from king Ahaziah who succeeded Ahab, met Elijah who had a warning from God for the king.  When Ahaziah asked the messengers what this man  was like they replied, “A hairy man with a leather belt around his waist”. He was instantly recognisable from this description as the king straightaway said “Ah, it’s Elijah the Tishbite”, in much the same way that John the Baptist was instantly recognisable –  a  man dressed in camel hair with a leather belt around his waist and eating locusts and wild honey.  Is it any wonder that the disciples centuries later saw Elijah as a precursor to John?

Now, we can’t end our thinking about who Elijah was without mentioning his death. Just as he appeared on the scene as if from nowhere,  so his going was equally sudden.  2 Kings chapter 2 verses11-12,  describes Elijah and his successor Elisha walking along together, when:  “Suddenly a chariot and horses of fire came between them and Elijah went up in a whirlwind to heaven.  Elisha saw it all and shouted, “My father, my father.  You – the chariot and cavalry of Israel!”  And this strange phenomenon is one of the reasons why Elijah’s influence was so strong as we shall see.

My final question is why. Why are we spending 8 weeks on the story of Elijah?  I don’t know what those who will be preaching over the next 7 weeks will be saying, but I can promise that there will be a lot about faith and prayer, strength and victory in the face of apparently insurmountable problems, foes and forces, the willingness to listen to God when that’s the last thing he felt like doing, and then to obey. The story is dramatic and powerful, a story of one man’s battle against evil, made possible only by his trust and faith in God, and by his reliance on the power of prayer.

We can tell how closely Elijah walked with God.  Just read 1 Kings chapters 17 and 18 and count how many times this phrase appears – the word of the Lord came to him.  The word of the Lord came to Elijah in so many different circumstances – with a command for what to do next, a warning to give someone else, or even to ask him a question – and yet James tells us that he was like us.  The first line of our vision statement is  that we “Grow in faith”.  Oh for the faith of Elijah, for the time to be quiet and listen for the word of the Lord.

Elijah’s prophetic role was recognised far beyond his lifetime, and beyond his strange ascent into heaven which caused people to wonder if he would return as he had been taken.  The prophet Malachi, in the final paragraph of the Old Testament  and written about 400 years after the time of Elijah says, “Look, I am sending you the prophet Elijah before the great and dreadful day of the Lord arrives.” and in Matthew 11 Jesus  describes John the Baptist as a figure like Elijah turning people to God’s ways and preparing them to meet one greater than him . So we see John the Baptist picking up Elijah’s ministry, wearing the same mantle of  calling people to repentance.

.  The question Jesus put to the disciples “And who do people say that I am?” received the answer “Some say John the Baptist, but others Elijah or one of the prophets”.  This demonstrated Elijah’s continuing presence in the minds of people centuries later, and at the Transfiguration, Moses and Elijah – representing the law and the prophets appear with Jesus on the mountain top, emphasising that Jesus had not come to do away with  the work they had done, but to build on it in a new way, to demonstrate that Jesus, God’s son is the fulfillment of everything written in the law and the prophets.

Our Worship Services are held in both churches every Sunday at 10am.  You are asked to wear a face mask if you are able.   You will be asked for your contact details at the door, for Track & Trace purposes.

We will continue to ‘Zoom’ our 10am service from St Mary’s Church, with the chance for coffee and chat afterwards in smaller breakout rooms.

Wednesdays 9.30am – Morning Prayer via Zoom with time for a chat afterwards.

For joining details for attending a service via Zoom details, please contact Georgina via email: officemanager@waltonandtrimley.org.uk.